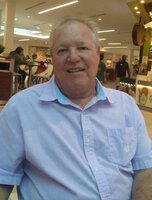 Thomas Edward “Tommy” Turner, of Crittenden, KY passed away peacefully at his residence on Monday, October 4, 2021 at the age of 73. He was born in Covington, KY on December 17, 1947; the son of the late Orville and Alice Turner. Tommy worked for himself hauling rock and gravel. In his spare time, he often enjoyed hunting with his bow and guns, fishing out on Norris Lake and watching drag racing. His greatest joy, however, was spending time with his family who he cherished deeply.

Preceding Tommy in death was his parents; his brother, Kenneth Turner and his sister-in-law, Delorus Turner. Those left surviving to carry on Tommy’s legacy include his wife, Sandra Turner; children, Jaqueline Turner and Brandy Manning; step-children, Bradley Duncan and Brian Duncan; grandchildren, Dylan Turner and Tyler Duncan; as well as many other close relatives and friends.

A visitation celebrating Tommy’s life will be held from 12:00 PM until 2:00 PM on Friday, October 8, 2021 at Chambers & Grubbs Funeral Home, 11382 Madison Pike, Independence, KY 41051. A funeral service will follow at 2:00 PM at the funeral home. Tommy will then be laid to rest at Independence Cemetery. In lieu of flowers, expressions of sympathy may be made in Tommy’s name to Autism Society Greater Cincinnati, P.O. Box 75, Milford, OH 45150. For directions, to leave a condolence message for the family or to share a fond memory of Tommy, please visit the corresponding tabs on this page.