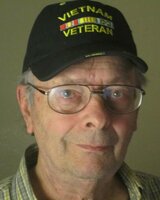 George “Butchie” McLean, 77, passed away peacefully at his residence with his family by his side after a courageous battle with cancer.  George was born the son of the late Wendell and Mildred Morgan McLean on February 3, 1945 in Covington, KY.

George was a proud Veteran of the United States Air Force where he served our country for four years, including in Vietnam.  He then went to work as a truck driver for Valvoline Oil Company for over thirty years before he retired.  He always enjoyed his daily dose of talk radio and playing words with friends, where he would challenge his sons to a game.  George loved being on the water at Laurel Lake with his neighbors, who were his best friends.  In his spare time, he became an excellent euchre player.  Out of all his hobbies, family was his most cherished.  George was so proud of the beautiful family him and his dear wife Jackie built.  He loved spending time and making memories with his grandchildren and great grandchild who will miss him beyond measure.  George was a simple man who loved his family and the Lord.

George is preceded in death by his parents.

In lieu of flowers, expressions of sympathy can be made in George’s name to Oak Ridge Baptist Church 6056 Taylor Mill Road, Latonia, KY 41015.

If you would like to leave and online condolence for the family or share a fond memory of George, please visit the corresponding tabs on this page.