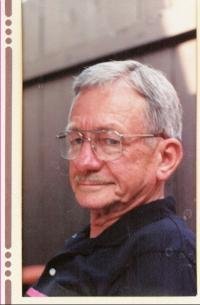 Tom Rouse, hero, WWII POW almost four years An American hero died Thursday. That's how Tom Rouse of Erlanger describes the death of James William Riffle of Corinth, his friend from Erlanger Christian Church. Rouse offers just this persuasive statement as proof: "He retired from the Navy, and had been a POW of the Japanese during World War II for three years, nine months and 17 days." In 1942, Mr. Riffle, then 19, braved four days in the Java Sea before he got to an island prison camp. U.S. Navy officials had decided to sink the ship he was on, the USS Pope, because it was out of fuel and ammunition and in danger of being seized by the Japanese. But Mr. Riffle survived the horrors and returned to the states to recuperate in his native Covington. "One day, he went to the Gibson Girl Lounge in downtown Cincinnati with some buddies, and met a hat-check girl," said his daughter, Karen Miller of Corinth. "Two weeks later they got married, and they were married 56 years." The loss of his beloved wife, Geraldine, in 2002, proved to be a heartbreak the 83-year-old war veteran could not survive. "He has grieved for her over two years and finally died" Thursday at St. Elizabeth Medical Center South in Edgewood, Miller said. Mr. Riffle was just 17 when he joined the Navy. "He was involved in the first American naval battle of World War II, and they never got any recognition for it," Miller said. That's because, she said, it was a fiasco the American military didn't want to publicize. Things were grim when the USS Pope sunk. "If they had been fighting any enemy other than the Japanese, they would have been picked up right away," said Miller's husband, Kenneth. "But the Japanese were so angry that the ship was scuttled that they pulled up to the survivors in the water and strafed them with machine gun fire and left them in the sea and steamed away. "Four days later, another Japanese ship came by and picked up those who hadn't drowned, been attacked by sharks or died of wounds. Those prisoners were picked up, taken to Bataan and ended up on the Bataan Death March." "When the Japanese finally surrendered," Kenneth Miller said, "there had been a standing order by the Japanese Imperial Army that all prisoners be executed. "After we dropped two atomic bombs, it was so devastating to the Japanese that they stood that order down. "He said they woke up one morning and all the guards were gone, the gates were open and a huge pile of Red Cross packages was in the middle of the compound. And they were afraid to leave their hutches for two days because they thought it was an ambush." After a stint in a Memphis hospital, Mr. Riffle -- weighing 77 pounds -- was reunited with his family in Covington, who were overjoyed because the Navy had told them he was missing and presumed dead. Mr. Riffle collected an armful of medals, including the Bronze Star and Purple Heart, and stayed in the Navy 30 years. He served 20 years in active duty, being stationed all over the country, and 10 in the reserves. When Mr. Riffle went into the reserves, he also took a job at the Covington branch of the U.S. Postal Service, working first as a letter carrier before getting indoor jobs. Mr. Riffle retired from both the Navy -- as a chief petty officer -- and the post office in 1976. "He was a woodworker," Karen Miller recalled. "Half the furniture in my house was made by my father." In addition to the Millers, survivors include a son, Kevin Riffle of Erlanger; a daughter, Cheryl Kordenbrock of Erlanger; a sister, Norma Reynolds of Ludlow; four grand children and one great-grandchild. Visitation is Tuesday from 10 a.m. to noon at Chambers &amp; Grubbs funeral home in Florence. Services begin there at noon. Burial will be in Forest Lawn Cemetery in Erlanger. Memorials are suggested to Erlanger Christian Church, Graves Avenue and Home Street, Erlanger, Ky., 41018, or World War II Veterans Memorial Processing Center at P.O. Box 305, Calverton, N.Y., 11933.
To send flowers to the family or plant a tree in memory of James Riffle, please visit Tribute Store
Print