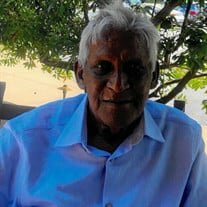 Please share a memory of Fred to include in a keepsake book for family and friends.
View Tribute Book

Fred Lionel Ragoo, 93 years old, passed away peacefully at home on Thursday, December 9, 2021 in Waxhaw, North Carolina. He survived his beloved wife Christine Koosmi Ragoo, who passed away April 2012. Fred is a father of eight children, nine grandchildren and one great grandson. Fred lost one daughter, Cathy in February 2013 and recently the day after his passing he lost his only son, Cliff on December 10, 2021. Fred was born on January 4, 1928 in Bourg Mulatresse, Trinidad and Tobago. He is the oldest of eight siblings. As the oldest he was obliged to help support the family at a young age. His motivation and drive inspired him to teach himself a trade as an electrician. He quickly became a success in this profession and was well liked and respected for his integrity, fairness, and diligence. His nickname was “Sunny” due to his sunny personality. Fred had an arranged marriage to his late wife Christine Koosmi on May 19,1951 and had 7 children together before moving to New York City for a better life. While in New York they were surprised with their eighth and last born child. They spent the majority of their life in New York City. Fred was hired to work for Con Edison based on his skills and vast experiences as an electrician. He was a hard worker and had good work ethics. He was assigned workers who were newly hired and out of college to be trained. He had a unique and positive way of teaching and helping workers realize their potentials. He again was well liked and respected. He quickly advanced to lead foreman/electrician and remained with Con Ed for thirty-four years until he retired at the age of sixty-five. Their children grown and moved on, and as empty nesters they moved to Florida where he and Christine lived until her death in April 2012. He then moved to Waxhaw, NC to live with his daughter, Helen. In his spare time he studied and kept himself abreast of the latest electrical devices/technologies. He loved to sketch and drew pictures of nature and animals, sculpted figures from clay, he captured the attention of his children with his imagination of story telling, enjoyed music—played the harmonica, spoons and can whistle beautiful tunes. His favorite music was the sounds of calypso and the steel drums. Just hearing one note, made him jump out of his seat to catch the beat with good rhythm and amazing dancing. He played cricket and learned to play softball from his co-workers at Con Ed. Fred and Christine enjoyed watching professional boxing and wrestling matches together. Fred loved to laugh, had a great sense of humor and could find joy in everything and anything. To know him was to love him. He was a kind, gentle soul with a generous heart. He will be forever missed. Fred is survived by his children Dolly, Helen, Rani/Marilyn, Geraldine, Marina and Kate. His grandkids - Mary, Elizabeth, Rachel, Sarah, Rose, Victoria, Steven, Serena, David. His great grandson Max and his Bichon Frise, Mello.

A graveside service for Fred will be held Saturday, December 18, 2021 at Richwood Cemetery, 1070 Richwood Rd., Walton, KY 41094.  Chambers and Grubbs Funeral Home, 8461 Dixie Hwy., Florence, KY is assisting the family.  To leave the family a message of condolence, please go to www.chambersandgrubbs.com.

To send flowers to the family or plant a tree in memory of Fred Ragoo, please visit Tribute Store
Saturday
18
December