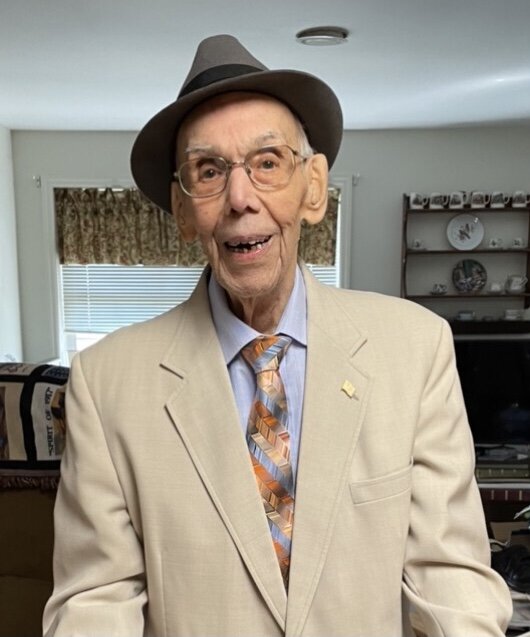 Please share a memory of Charles to include in a keepsake book for family and friends.
View Tribute Book

Charles E. Phillips, known to many simply as “Charlie,” was called home on July 27, 2022 at St. Elizabeth Hospital in Edgewood, KY. He was 97 years old.

Born in Cincinnati, OH on January 4, 1925  to Curtis and Virgie [Shirley] Phillips, Charlie most recently called Erlanger home.  Charlie attended Holmes High School, and after receiving his diploma at night school, he enlisted in the United States Marine Corps. Charlie proudly served his country in World War II directly following the attack on Pearl Harbor. He was deployed to Hawaii and later on, the South Pacific. At the behest of his mother, Charlie underwent training in typing as part of his night school studies. He would have been one of the Kentucky Marines who was deployed to Iwo Jima; except that he also happened to be one of the few at the time who possessed skills in using a typewriter, so he wasn’t.  Call it good fortune, a mother’s sage advice or God’s plan, but this turn of events changed Charlie’s life beyond anything he could imagine. After his time in the Corps, Charlie wanted to come home and settle down. He began work in sales at Trauth Dairy. He met Francis “Naomi” Menefee on a blind date. They courted and were engaged for a year, then got married. Their love lasted 75 years. The house Naomi and Charlie shared was never ever quiet (but always in a good way).  It was the place where everyone–family, friends from church, neighbors– gathered for special occasions, holidays, or just casual get-togethers. Charlie was a near lifetime member of Calvary Baptist Church. At one time or another (or maybe simultaneously) he was a Sunday school teacher and a member of the choir. Charlie was not only an active member of his congregation from an early age, but he lived its mission every day–with a servant’s heart. He would often rent out Jimmy’s Roller Dome on the weekends just so folks would have a place for fellowship and fun. After retiring from Trauth, and taking some work in realty and insurance, this exceedingly generous man continued to volunteer in the community even into his golden years with Meals On Wheels, the Northern Kentucky Senior Center and Baker Hunt Art & Cultural Center. Charlie was a singer, a musician on harmonica and guitar, a painter, a handy builder, a giver. He was a gentle, friendly, and lovable soul.

A visitation will be held at Charlie’s home church: Calvary Baptist (3711 Tibbatts St, Covington, KY 41015) on Tuesday, August 2, 2022. You are invited to come and share remembrances and stories with the family from 11:00 AM – 1:00 PM. Directly following visitation a funeral service will be held (also at the church) at 1:00 PM. At the conclusion of the service, military honors will be rendered.  On a future date, Charlie will be laid to rest privately at Floral Hills Memorial Gardens (5336 Old Taylor Mill Rd, Covington, KY 41015).  Please consider giving memorial donations to the Calvary Baptist Building Fund.

To share an online condolence for the family or to share a memory or photo of Charlie, please visit the corresponding tabs on this page.

To send flowers to the family or plant a tree in memory of Charles Phillips, please visit Tribute Store
Print
Tuesday
2
August